Today my boobs were made for something other than boobs – they were the perfect food catchers!

First was in the morning with a piece of crumpet when I was eating my breakfast at the office. Later it was some fish from the fish & chips I was eating that I scooped out on the street – I thought it had fallen but didn’t know for sure until we moved and left the bar and I felt something!

My big boobs and my sports bra seem to be the perfect catcher now that they are bigger! 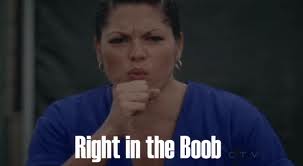 That’s all I got today! 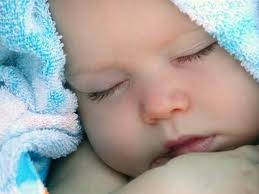 Dance of the Day was = “Kalos Se Vrika” by N Stavento

Besides the fact that I am writing this at friggin’ 6.15am!!!

Today is tech for the show tonight. I have to take the props in my car and pick up more props on the Upper West Side at 7.30am to be at the Theatre by 8am.

So alarm was set for 6.30am as I had everything prepared last night.

I mean, I am having troubles sleeping anyway, went to bed late getting things sorted out for today, but also because I just can’t seem to go to sleep early anyway, and waking up several times an hour as my “routine” these days in pregnancy….and then on top of all that I have to wake up an HOUR early!!!!

Why does that happen?? Why, when you have to get up super early do you wake before the alarm goes off??!!! 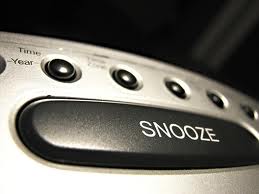 Wasn’t that why the Snooze button was invented??? To ease you to wake up?? For those that just can’t wake up when the alarm goes off?? Why couldn’t that be my scenario this morning???!!!

And I tried so hard to just get in a comfortable position and fall back asleep – it was a lost cause.

And the best part of what lies ahead is I can’t have any coffee or the amount of coffee I would need to get by today…thanks to no caffeine while pregnant.

Woo Hoo! Let’s see how I make it through the day!!

Improvised Acting Video I uploaded to my other blog was = “Empty”

Happy Memorial Day to those that don’t have to work and are at the beach tanning and lazing and having a good day…Boo! 😦

Annoyingly my dreams last night consisted of “to-do” lists and now I can’t remember what was on there!! And I know it was important! UGH!!!!!!!!!!!!!

The least my mind can do, since I’m not sleeping well and so having these dozing dreams, is allow me to remember them when they are important! I mean, that’s also part of the reason why I am not sleeping – the fact that I have so much on my mind, ticking away, and it won’t shut off. And now I’m sitting down trying to write down and re-create all those “to-do’s” and instead just staring at a blank page next to me.

Let’s hope they make themselves present throughout the day as today is a busy day and then tomorrow is just going to be crazy super super busy as I have to be at the theatre at 8am to start tech as my show opens tomorrow night. And so I’m pretty sure some of those silent “to-do’s” have to do with tomorrow and the show! UGH!!!!!!!!!!!

I have no time to dwell on it – so will wait for those AHA moments to come to me….hopefully…at bizarre times…..please….

Speaking of my show, tomorrow is the first show and then there are two on Wednesday so if you want a chance to see and meet  Jose Rivera, and watch his NYC premiere of the workshop production of BRAINPEOPLE then you better get your tickets fast for this limited three show engagement!

The link for the tickets are:

Dance of the Day was = “Leave Me Alone” by Michael Jackson

Do you know what I find interesting? The tricks your mind plays on you when you only see certain things, or a glimpse of something. For example while on the subway, and you only see something on a person from the corner of your eye and you assume one thing about the person standing next to you and then you later look and realize that’s totally not who you thought was there!

I saw a guy next to me who was wearing a Mets shirt and I could see in my short glimpse out of the corner of my eye that he had a belly, so I thought a middle-aged man was standing next to me who was a Mets baseball fan. I could completely picture who this middle-aged man was, or at least my mind filled in the blanks based off those few facts I had caught a glimpse of.

But then I looked around later to get out the way of the opening subway doors and I had to double take! This middle-aged Mets fan was in fact a teenager/young scrawny guy with nerdy glasses on and the Mets shirt he was wearing was huge on him so it looked like he had a belly I guess in the corner of my eye when it billowed out as the train moved.

It was weird as it was a totally different guy to who I thought I was riding next to for almost all of my journey! It threw me because it had been a comfortable fact that I knew who was next to me and then realizing my expectations were wrong took me a moment to take in.

This happens a lot to me – since I am constantly tired and that doesn’t help – and not just with people but everything, especially mis-reading things around me.

Like yesterday I was walking down the street and of course in my usual rush, this time pulling a suitcase full of props and late to rehearsal, or trying to not be late I should say, and I had not only to double take but also to stop as I got caught off guard. I thought the awning to the building ahead read:

when it actually read:

Perhaps I need more sleep as that was two events yesterday so hmmmm….

And I found out I have to be the prompter for the show I am working on so I really need to be able to focus on the script to read out their lines when prompted!!! I can’t screw that up! 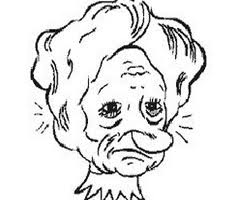 It’s one of those days…you have a shower and then boom you’re drenched again it’s so hot, and you haven’t even left the house yet!! I have to carry props today too of course in this heat mania! It’s the humidity that’s going to kill me – and its only May!!

That’s part of the reason I hope to get out and have the baby in London as this will be horrendous here if I have to stay as its going to be such a hot summer at the rate it’s going! UGH! It’s going to be miserable pregnant here!!

AHHHHHH!! Please Green Card come before I can no longer fly!!!

I’m also in that in between phase too where I feel like I do still need to cover the bump, which is there, because I still feel like I’m in the “unsure if she’s pregnant or just fat” area! And still in denial, I know I know!

I have lots of baggy clothes so that’s not the issue, although you can still see the bump, but I need to wear layers too under as in my office and in rehearsal it gets cold – so I can’t win in this dire heat!! All the baggy clothes that are the lightest for this heat are super huge too so I look even bigger, but frankly I don’t care in this heat!

Improvised Acting Video I uploaded to my other blog was = “Thanks To My Sis!”

Do you know what I realized?

I am waiting for a bunch of “cards”…my Green Card, my new health insurance card, my new British Airways credit card – all with promises of arrival, all late, all missing!

Ha – just thought of another card – my mum sent me a birthday card last year that never got to me either – another card haha! Well let’s hope the other cards I’m waiting for now don’t follow that path!! 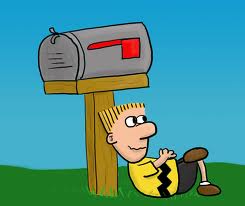 I finally got around to actually sitting down and looking at my calendar and my schedule as I had an earlier thought in an earlier blog entry about whether I had drunk any alcohol on my 365, or not.

I can’t believe it – my earlier thought was true! I started 365 on January 9th with a week of detox of only fruit and veg, and then there was like three or four days, and then I found out I was pregnant!!

I looked at the calendar to see if there were anything in those three or four days but I was in rehearsals until past 10pm and busy, and nothing like a dinner or bar meeting or anything was scheduled, so it turns out I seriously have not had an ounce of booze in what now is 138 days!!

Which means now for real I need to consider this….

Well, being pregnant, that would take me to September 22nd or thereabouts so that would already bring me to something like 250 days! So yeah that leaves like 100 plus days but if I am breastfeeding I am not supposed to be drinking anyway, so maybe it’s not so unrealistic after all??

Or am I going to want that shot of tequila after I give birth?? Or if I stop breastfeeding before January 9th or something??

But I would have gone so far though already.

I need to think.

I won’t announce it until I think about this, or I guess I can even wait and see how I feel.

What do you guys think?