Dance of the Day was = “Fiesta Caliente” by Happy Noche feat. Will

Firstly…the little monkey is still in the belly…so two days late now. He’s still in there fighting to get some elbow, knee, body, well, any kind of room!

I have a hospital appointment tomorrow morning that was scheduled if he didn’t arrive anyway by now, so let’s see…

I am still getting lots of pressure and pains, which makes me want to move around or shift positions or something…but this lovely UK rain just hinders me walking around the block.

I really wanted go out yesterday, although still trying to recover completely from this cold before the baby comes, but it was raining all day. And there is a fun fair on the green near us that me, my dad and Stuart went to on Friday and played some games….and lost! So I wanted to go back yesterday as it was the last day…but no, it was pouring all day 😦

Those stupid fun fair machines are so addictive and annoying! You know these ones… 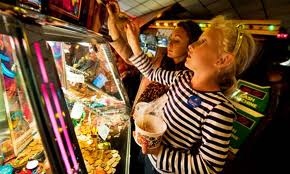 The coins are just hanging off the ledge waiting to be pushed off and make me rich!! And then they get you as there are bank notes just hanging there too…that appear to just need a slight nudge by me putting in one coin! Just one coin…or one more…or how about a few more….arghhhh now my pockets are empty!!!

I find these way more fun than slot machines …although my dad and I also like the claw machines that can grab a toy – sadly also annoying and hard! But strangely addictive! We’ve won a toy before but at this fun fair we all walked away with nothing!

So, I was hoping to go back and get something after I spent all those coins! I would feel better if we walked away with something! You know, and redeem ourselves!

But, no, the rain wouldn’t let me….so we missed out 😦 Which probably is best in the financial long run I guess!

And again it was raining out today – pouring this morning – but cleared enough to have a quick wander out in the late afternoon. However, with this pressure and pains it feels like the little monkey could come anytime so I have to be careful with how far I go. But tomorrow’s forecast is RAIN….surprise surprise!!

This morning the MTA card machines were not working – they were not accepting any payment with a credit or debit card, just cash. So there were huge lines of angry folks dashing about in panic this morning. They kept coming up to me asking if I had seen anyone’s card transaction go through in front of me, as I was also in line to refill my MTA card, but with cash….actually with coins!!

Since I am leaving in two days, and my monthly metrocard ran out Saturday, I have been scrounging around the house gathering coins to pay for my two subway rides a day – so again today I managed to find $4.50 in quarters and dimes for today’s journey haha! 🙂

So I was afraid that people were going to be mad at me for taking so long to put in all the coins to load my metrocard, but lo and behold they were already mad at the machines, so I escaped 🙂 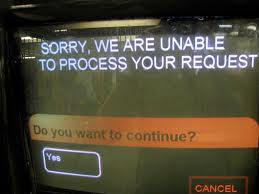 As the journey continued…

“I was watching you both and I can tell you are both really in love and will be married a really long time.”

She also said that her and her husband were celebrating their 24 year anniversary so wanted to share that with them.

It was kinda cute! The younger couple were thrown off a bit and went bright red and kept saying “thank you” to them.

Speaking of love on the subway – the busker last night on the platform was singing from The Little Mermaid!!! It was cute but kinda funny that it was coming from a guy 🙂 He had a good voice though!

And lastly, before my journey to the office ended, I saw two men with their flies down! Why does it not feel our place to tell people when their flies are down?

I wanted to say something but then one got off a stop later. But then I was across from the other one, and just wanted to tell him, but I didn’t feel it my place to.

It was rush hour too so kept thinking that I couldn’t just announce it to him as others would then notice and I didn’t want to do that to the poor fellow – and I was not close enough to whisper it….I hope someone told him!! 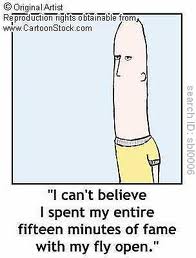