Dance of the Day was = “Miami” by Will Smith

New York City is the perfect place to be an actor….and I don’t mean that in the sense that it’s duh an artistic town, but in the sheer fact that you can go around talking to yourself, like memorizing your lines out loud or getting into character/role in public, and no one thinks anything of it! You don’t need an excuse to be mumbling to yourself on the subway or as you walk down the street, even when you’re standing in line at Starbucks…beacause everyone around you is used to the constant crazy! There is always something crazy around the corner, next to you, staring at you, so as an actor, you fit in quite nicely as IT IS YOU! 🙂 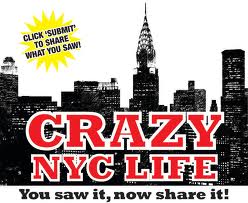 I walked from the office down to NYU today, yes to get my cardio in, but also because it was a chance to practice my role that I was about to interview in for the mock trials. Yesterday I had to play the expert on chlamydia, which I play every year for the mock trials, but today I had to play an additional new role in another mock trial – the ACS case worker. I felt less familiar and less confident with this role just because it was my first time, but thought nothing a good brisk walk, in role, wouldn’t be able to cure 🙂 I often do that for memorization – I am actually luckily a quick memorizer, but doing things like learning lines while at the gym on the elliptical always worked, and in the same vein, walking and speaking out loud helps too (a quick trick to those that need help memorizing…try it!).

It was a little tricky though today as I was leaving while the whole of NYC and their mother were leaving work during rush hour and had to thus weave myself through the hoards of people while still trying to maintain a brisk nature for the cardio sake, and also trying to look down at my notes in hand along the way, while mumbling! AND…hitting Herald Square and Union Square as well as the equally busy West Village area was not fun. It was me multi-tasking. Dizzily, I might add.

And, of course being a true New Yorker. A Crazy. You know, one of them 🙂

Dance of the Day was = “Let me Think About It” by Ida Corr vs. Fedde Le Grand

Cardio today was actually at the gym – that thing called the gym that I haven’t been to in a looooong time! It’s a good thing that it’s only $10 a month as I feel less guilty. Thank you Planet Fitness. I managed to squeeze in some elliptical between conflicts today and boy am I out of shape – it was super hard! And I was on an easy level. I tell you if I hadn’t added the whole “Healthy” criteria to this 365 Challenge I would have been at that elliptical machine like the old crazy days where I wouldn’t leave the gym until I burned off 1,500 calories! Yup, I even went through a time where I had to call my good friend to come get me as I was puking in the gym shower due to my extreme-ness. That was an ultimate low-point, and I have not repeated that since, or got that low. But, to be honest, I have those urges, that desire still is there, that masochistic extreme addiction….I feel it all the time. Hence the food and veg week I am on right now, and believe me that’s wild. Since tomorrow is the end of the fruit/veg thing, I decided to have a little oil today with some veg – or I allowed it to be there – going against my instincts – but trying to be “normal”…whatever that is! I guess, better – I am trying to be better and lead a healthy lifestyle without all the crazy. This 365 Challenge is extreme enough without adding more to it!!

I also had some natural fruit gummies – also was hard to succumb to but I need to ease my body back to eating healthy so a bit here and there today and tomorrow should do it. Although I feel bad. This is how the whole crazy dieting starts though – I feel bad about myself and punishment is needed – although I don’t see it that way, but that’s what it sometimes feels like if honesty is underlying here. If I could eat nothing. Literally NOTHING, I would. And you want to know a secret….I have actually tried to eat nothing. I get to a faint state where I can’t take it any longer and give in…thank god!!!! But l admit that I have tried. I know it’s not good for me but now and again I get the extreme girl in me – the real extreme girl. I lost a lot of weight this past year because I lost my appetite – stress and an upcoming marriage would do that to anyone though! 365 will help me – if I can keep it up!! Day six! Tomorrow will be a whole week!

One good thing today, I got to dance the way I love to – in minimal lighting, high volume and in front of a mirror!!! And out came my secret techno cage dancer 🙂 LOVE!!! My body was a little tired but I pushed through. All I needed was a black light and white clothing on 🙂 I am soooooo European hahaha!!

TEQUILA 365: “Well, make it to the end and you get your tequila”

TEQUILA 365: Will the Bartender know what I want?

TEQUILA 365: What to do with Leftover Beet Juice?